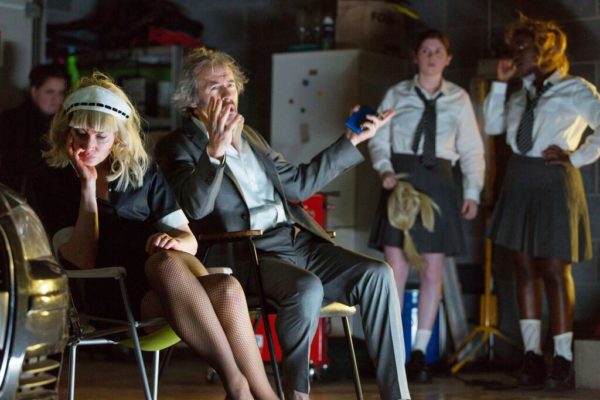 When we have sufficiently tortured each other at National Theatre. Photo: Stephen Cummiskey.

The central metaphor of Martin Crimp and Katie Mitchell’s When we have sufficiently tortured each other is penetration. Sexual, of course. Woman reports Man saying, ‘All I think about is being inside your body – to penetrate your body, that’s all that counts’. Also textual. Woman tells Man, ‘you hold words to a woman’s throat with the same accuracy you’d hold a knife and with one simple sentence you knock her to the ground and penetrate her body’. Reviews can penetrate too. Strap in for some penetrating analysis of the production’s take on gender roles. (Yes, I know everyone’s really here to see Cate Blanchett in a strap-on).

When we have sufficiently tortured each other is a loose adaptation of Samuel Richardson’s 1740 novel, Pamela; or, Virtue Rewarded. Pamela, in which a servant girl resists her employer Mr B’s attempts to seduce and rape her, documents them in writing, and is eventually rewarded for her ‘virtue’ by marriage to him. It is a #problematic text to read in the light of contemporary sexual mores. It was envisaged by Richardson as an instructional text for women, men and, particularly, girls. The ostensible message is ‘hold out till marriage’ but interpretations of Pamela, such as Henry Fielding’s unsubtly titled parody, Shamela, have depicted Pamela as a woman who schemes to entrap her master into marriage, tempting him through her refusals: no really means yes; Pamela was ‘asking for it’. Crimp and Mitchell’s version penetrates the complexities of the situation in the novel, re-envisioning it as a sadomasochistic sex game played between two characters known only as Man and Woman, with a supporting cast of characters drawn from the clichés of pornography: school girls, a lesbian in black leather boots, and a stable-hand.

Lack of context makes When we have sufficiently tortured each other dynamically unstable. The characters are not in the eighteenth century. They are in a breeze-block garage (designed by Vicki Mortimer with painstaking naturalism), complete with status-symbol Audi. But they are also not not in the eighteenth century – the gender and sexual norms are scarily consistent across almost four centuries. In the first scene Man says, ‘I’m a man. That means I can say and I can do to you whatever I like. Nothing will change that. In fifty years it will be the same – and the same in a hundred. And if you were to run from this room through any of these doors you would find yourself in a room exactly the same – and if you then ran from that room through any of that room’s doors you would find yourself in another room exactly the same – and so on and so on – Pamela. And in each of those rooms even if it was two hundred years from now or three, you would still be a child and I would still be a man and I would still have the power’. I hope that’s not true.

I found the absence of knowing whether or not what Man and Woman do to each other is consensual the most unsettling gap. Is it (consensual) BDSM or is it abuse? In the wake of #metoo, there has been a campaign for ‘no grey areas’. It is important to draw clear lines of behaviours that are wrong, activities that are beyond the pale – anything that infringes another’s bodily autonomy without their consent, for example. But the discussions about power and consent that emerged from #metoo also revealed how ambiguous some situations can be. I would feel a lot more comfortable if I could put Man and Woman’s relationship into a box – but perhaps it is and has to be more complicated than that. Human relationships are all about shades of grey (which is why negotiating and obtaining enthusiastic consent for each sexual act is important and is something that is not shown in Crimp’s play – don’t model your relationship on this, girls).

Blanchett and Dillane give multi-layered performances, imbuing Crimp’s slippery, intellectual script with depth. As Woman, Blanchett sometimes edges her words with a defiant irony, mocking Man’s manhood; sometimes, she puts on a high, girlish voice and plays at submission. Dillane is blustering and loquacious as Man, boasting about how much money he has in the bank, and tingeing his anecdotes that fill up the garage’s stale air with vague threat or seduction, the two almost indistinguishable.

They also swap roles. In the opening scene, both Blanchett and Dillane are dressed in French maid outfits; later, they take it in turns to put on and take off a grey suit. At first, it seems exhilarating that the roles of Pamela and Mr B, submissive and dominant, do not seem to be tied to the actor’s sexed bodies, as they can be taken on by either one of them. However, when Dillane is being Pamela he is being a woman, hectoring and girlish. There is none of the ironic edge of Blanchett’s Pamela in Dillane’s; he plays her as straight submissive. When Blanchett takes on the role of Mr B, she is being a man. She strides around in her suit with masculine gait. At one point, she even jacks off her imaginary penis, jizzing all over Dillane’s Pamela with her (actually, his) words.

Therefore, although the flipped gender casting seems to signal a radical interrogation of gender roles (what it means to be a man, what it means to be a woman, what it means to be a girl, as the play keeps saying), When we have sufficiently tortured each other actually ends up reinforcing established, heterosexual gender roles under patriarchy. Whilst the play questions whether masculinity has to be attached to domination and force, it never questions the central assumption that to be a man you have to have a penis. That to be a woman, one must allow oneself to be penetrated. This is proved in the final scene, when Blanchett as Mr B assumes her strap-on. At the end of the play, Dillane is Pamela, a woman, because he is going to allow himself to be penetrated.

The problem with When we have sufficiently tortured each other’s focus on penetration is that it centres the phallus (the penis as an abstract concept). I found the most powerful image of Mitchell’s production the moment when Mr B/Man/Dillane holds Pamela/Woman/Blanchett in a vice like grip against the car, pressing her bottom against his penis, as he forcibly dictates Pamela’s happy ending for her to type. The pen = the phallus (and OK Pamela doesn’t actually use a pen, she uses a MacBook – like the female writer in Ella Hickson’s The Writer – but it’s a contemporary adaptation).

This picks up on an uneasiness about gendered authorship and control I sensed when reading Pamela: Mr B is only persuaded of how virtuous Pamela is by reading her letters and diary entries that chronicle his attempts at seduction. At one point, Pamela describes sewing her writing into the lining of her dress to protect it. Mr B reading Pamela’s writing therefore substitutes textual violation for sexual violation; Crimp’s version repeatedly stages Man’s surveillance and critique of Woman’s writing. Is Pamela torture porn? Do readers of the novel and, indeed, viewers of the play get sexual pleasure from witnessing sexual harassment and attempted rape?

In the Preface to Pamela, Samuel Richardson even styles himself as the novel’s editor rather than its author, which has supposedly been written by Pamela, adding a further layer of metatextual male control. Blanchett’s Woman muses on what it means for her as a female character to have been scripted by a male author – whether she is a real woman with ideas of her own, or a character, limited by confines of her creator’s idea of what a woman should be. Just as the spectre of the male author hovers over Pamela the novel, Crimp’s authorship casts a phallus-shaped shadow over the production. What does it mean for a male playwright to attempt to write a feminist play?  I would be very interested to know how Mitchell and Crimp negotiated the gendered power dynamics of their relationship in the rehearsal room.

When we have sufficiently tortured each other is on at the National Theatre until 2nd March. More details here.