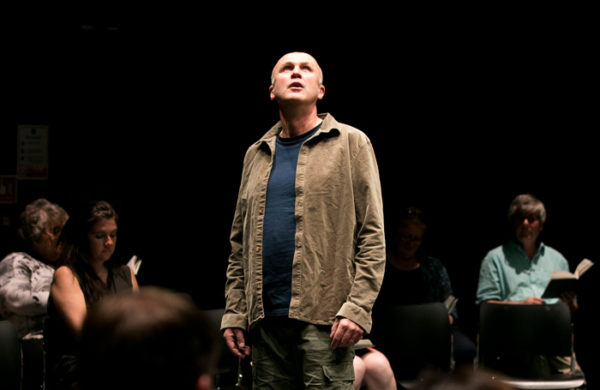 If I had the time and materials, I would like to write this review in the format of a choose-your-own adventure book. There are at least two paths through this performance and multiple smaller choices. Yet maybe that would overstate the amount of choice given to the audience of Tim Crouch’s new play, Total Immediate Collective Imminent Terrestrial Salvation. Rather, the potential of the theatrical encounter – the sense that anything could happen – is weighed against a small range of possible outcomes, previously delineated by a script. Performance set against text in a complicated dance.

The audience is arranged in two concentric circles. There is no stage. There is a book on each chair. Hardback, green, with gold embossed letters on the cover: ‘Total Immediate Collective Imminent Terrestrial Salvation’. We have been told to leave our bags and coats in the corner of the studio. I feel naked without my reviewer’s notebook, without the comfort of my phone to switch on as soon as the lights come up. I will have to pay attention. I flick through the book. There are pictures and there are words. I flick to the last page. It doesn’t make sense yet.

There is something about the material form of a book that gives the process of reading a specific form of attention. Feeling the weight of a book in your hands. Judging, by how many pages are left, how much more plot the author can be reasonably expected to cram in. The ability to read ahead or flick back or shut the book and disengage. Performance demands a different kind of attention. The co-presence of bodies in space. The thrill of eye-contact. The invitation to participate.

An actor walks into the circle. ‘The book is part of the play’, she tells us. She tells us to open the books. She tells us to turn the pages when she says ‘OK’, calmly, motherly. She is holding our metaphorical hands. Later, she will invite members of the audience to read aloud from the book. Pick me, don’t pick me. A duet of reluctance and pleasure, wanting to be picked out for a moment and wanting to remain invisible.

The design of the play resides within in the book, in Rachana Jadhav’s beautiful illustrations that recall a graphic novel. The illustrations create a montage, plunging the audience into story: a boy falls through the ice on a frozen lake and his father dives in to try to save him, while his mother and sister stand crying on the shore. The father – Miles – lies in a coma and has visions of the end of the world, founding a cult with him as the charismatic centre. The images hurtle into the future. A desolate, mountainous landscape in the future. A barbed wire fence. A sleeping girl – Sol – and a woman – Anna – standing watching her. I look up from my book, and back down, and up again with a thrill of recognition. The performers have arranged themselves in space to match their positions on the page.

Under Karl James and Andy Smith’s sensitive direction, the relationship between the characters gradually unfurls with tenderness. Susan Vidler has a commanding presence as Anna, slowly shattering with deep buried grief. Shyvonne Ahmmad brings a feral vulnerability to Sol, eyes wide and fierce as a frightened animal. Pippa Murphy’s sound design – the cicadas, heat haze and hum of a wire fence – curls the world of the play off the page and into the studio.

Sol burrows her eyes into her book, which is both comfort blanket and prison, reading the terse lines aloud. She cannot deviate from the script, is not allowed to ‘read ahead’. The book both characters carry and the one each audience member holds in their hands is Miles’ teachings. In his omniscience, he has foreseen everything, including this encounter. God-the-father, the playwright-God. The end of the world is nigh.

Or is it? Gradually, Anna coaxes Sol to tear her eyes away from the book. There are thrilling moments of dissonance between text and performance – when lines are added by the performers that are not written down; when stage directions are not acted upon; when audience members hesitate slightly too long or stumble over their words. Through these small acts of disobedience, a path emerges to questioning Miles’ authority and apocalyptic vision.

Yet there are also limits. I am surprised by how compliant we are as an audience, when Tim Crouch strides onto the stage as Miles, embodying his magnetic presence. A benevolent patriarch, he indicates languidly when we can turn the pages, racing to an ending that I do not want. Do we need to obey his instructions for this theatrical contract to work? What would true disobedience look like? Would it break the play?