I am not normally a person who cries in the theatre. I think I’ve cried once before (Nirbhaya, created by Yaël Farber and company, at the fringe 2013). I’ve had near misses a couple of times, prickles that are easily blinked away. But as I was watching Adam I felt tears pool in my eyes. They overflowed down my cheeks when the Adam World Choir, a digital choir made up of videos of trans and non-binary singers from around the world, began to sing, “We are Adam. We are real. We are just people.” As the music soared, the screen at the back of the stage filled with faces, bravely and joyously affirming their humanity in a time when many political regimes seem to be conspiring to deny it.

Adam, by Frances Poet, is based on the true story of Adam Kashmiry, a trans man who left Egypt to seek asylum in Glasgow. In a capacious hour and twenty minutes, the play takes in Adam’s childhood and adolescence in Egypt, where failing to comply with strict gender norms risks physical violence; Adam’s discovery of a community of people like him on the internet; the delays and difficulties of his asylum claim. Particularly compelling is the insight into the desperation the UK immigration system can cause LGBTQ asylum seekers; Adam is placed in the near impossible situation of proving that he is a man, when he is denied testosterone before his asylum claim is granted but the asylum claim depends on whether he is taking testosterone. 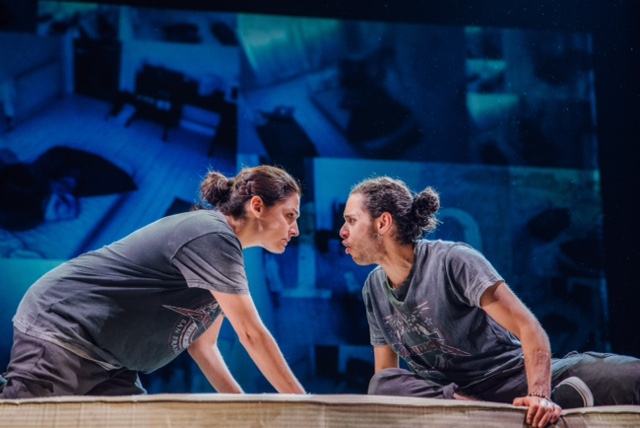 The central metaphor of Frances Poet’s lyrical script is the contranym: when one word means opposite things. Cleave – to cut apart; to bind together. Under Cora Bissett’s sensitive direction, there are two Adams: Adam Kashmiry, whose performance is affectingly honest and generous, and Nesha Caplan, who also gives an assured performance. The script draws on ancient Egyptian beliefs about the soul as a combination of ren (name), bâ (personality), and ka (vital spark), which makes Adam worry that transitioning risks compromising this. When he is first trying to articulate his difference, Adam asks the internet, ‘Can the soul of a man be trapped in the body of a woman?’ and the Adam World Choir echoes, ‘Can the soul of a woman be trapped in the body of a man?’ The space beneath the stage is littered with discarded mannequin body parts. Ultimately though, Adam’s story is of him coming fully to himself. ‘I’ve changed my name. I’ve changed my body. I haven’t lost my soul.’

I normally feel a bit uncomfortable and self-conscious participating in standing ovations. For Adam, I jumped to my feet almost as soon as the last notes had rung out. We stood together as an audience.

Eve, an autobiographical one-woman show written by Jo Clifford with Chris Goode and performed by Clifford, is more understated than Adam but effective in its simplicity. Clifford is alone onstage in a tunic dress, in front of a sunset-coloured set and mirrors that become projector screens for old photographs of herself and people in her life. Her story and the way she presents it is an antidote to certain narratives of trans identity that circulate in the media and on film and TV. She tells us, ‘don’t think I’m going to tell you a story of suffering. A story of unhappiness and betrayal and being a victim of it all. And I will not tell you the story of a girl born into a boy’s body, whose troubles end when she meets a nice kind surgeon who gives her a vagina. A girl can have a penis. A boy can have a vagina.’

One of the loveliest things about Eve is the care that Jo shows towards John, her former self. She spends much of the show with her back to the audience, addressing projected photographs of John. She does not want to forget him or pretend he never existed, despite how hard she had to work to say goodbye to him.

Eve embodies the belief that the personal is the political. At the beginning of the show, Clifford says ‘I want to write a manifesto because I feel militant’. Clifford’s manifesto is not radical. She quietly but emphatically asserts, ‘I really do have the right to exist’. It seems so obvious, this modest claim to humanity. But it needs to be said and repeated until it is heard.

In the Traverse lobby, a family is arguing. An older man is talking about Adam, stubbornly calling Adam “she”. I can’t make out exactly what he’s saying but he appears to be confused by why Adam felt the need to transition when he could have been the “dominant one” in a lesbian relationship. His daughters repeatedly try to explain the difference between sex, sexuality and gender. “I’m not trying to make a statement,” he says. “I’m just trying to ask a question.” His daughters shush him in a paroxysm of politically correct embarrassment. “Dad, it’s a spectrum. Stop being such an old fogey.” Neither side is giving ground, when they decide to get some lunch. Then something shifts. Perhaps he is just hungry, but the man finally seems open to consider what his daughters have been telling him. One daughter seizes the advantage, “It’s clear that you didn’t understand the play before. You had to understand these concepts to understand the play.”

Adam made me think of Yaël Farber, not just because it was the last time theatre made me cry, but also because it reminded me of what she has said about the function of theatre and the actor. In an interview in the introduction to her collection of testimonial plays, Theatre as Witness, Farber asserts that she believes in ‘the ancient concept that the actor has a calling to channel the needed catharsis of their community. The audience benefits from this in the safety and privacy of the dark auditorium, while the actors – those especially brave, dangerous souls – choose to go out and strip their skins away each night, and express the collective truth for us all.’ Adam Kashmiry and Jo Clifford are brave and profoundly generous souls in the way they share their stories. However, I also find something troubling in the idea of a ‘collective truth’, a communal catharsis, when trans people are often marginalised by cis-focused society. Should cis people be allowed to feel catharsis from stories of trans oppression? I worry that such an idea of theatre puts too much pressure on minorities to challenge prejudice, rather than making it a responsibility of the audience to overcome their own prejudices. This is not meant as a criticism of Adam or Eve – the latter, in particular, resists such a reaction in its refusal of tragedy. It is more of a reflection on my position and reaction as a cis audience member, how I did not have to risk anything to watch. Yet the conversation I overheard in the Traverse lobby suggests that the impact of Adam does not stop with catharsis; the show moves its audience members to think, to take on the difficult task of working through prejudice. Theatre that can facilitate such conversations is vital.

Adam and Eve are on at Traverse Theatre until 27th August. Click here and here for more details.