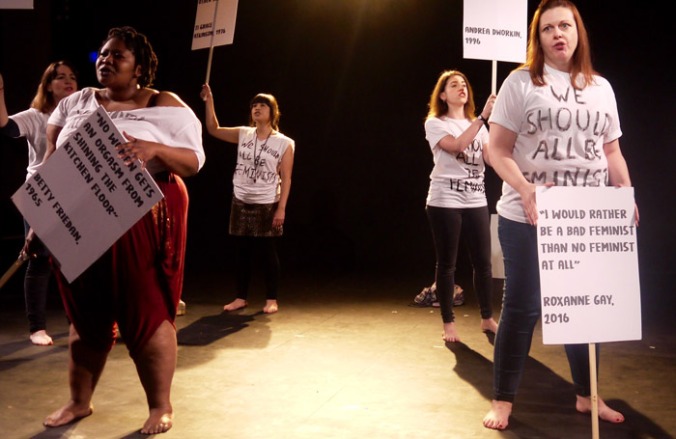 I want to start at the end of I Have a Mouth and I Will Scream. The six women in the cast stand in a circle to play a game, swapping places with each other to avoid being the one left in the middle. At first they jostle and shout at each other, then subside into politeness. One woman is left in the middle. She gives a speech about the difficulty of building something – an attempt at revolution – when the instructions don’t make sense. But she also offers hope that ‘the revolution can be taught’. The audience applaud (a bit too politely?), sensing the final cadence. Another member of the cast holds up a placard which reads, ‘This is not the end’. They trash the stage with nappies, cereal, tampons. Printed ‘Womanifestos’ are strewn through the audience. I pick one up and read:

‘Institutions we depend upon are now wholly inadequate.

Honestly? Some things are made to be destroyed.

If chaos ensues then that is marvellous. There will be dissent tonight; the dissent should be recognised as integral to the play.

But If you take yourself too seriously when creating art you run the risk of condescension.

Because Sometimes academia is not a useful tool.

A hammer is a useful tool.’

Can you start a revolution inside a theatre? How can you script dissent? How can you fashion a play that is a hammer?

I am sceptical of plays that intend chaos. Like how productions of Alice Birch’s Revolt. She Said. Revolt Again, with its impossible stage direction, ‘This play should not be well-behaved’, always end up being a bit too well-behaved. Chaos seems unscriptable and unrehearsable. Stage mess will always be, to some extent, staged (and quickly swept up in the hasty fringe get out). This is partly a formal problem, which I Have a Mouth articulates. ‘Stop complaining there is no narrative’, one of the cast shouts at the audience at the beginning of the show. The forms of theatre we depend on, I Have a Mouth suggests, are inadequate for what needs to be said.

I Have a Mouth and I Will Scream is a controlled explosion. It’s like Abi Zakarian and Rafaella Marcus have dramatised my Twitter feed. Sometimes cacophonous, sometimes harmonious, it is a collection of sketches, songs, speeches and stand-up on various feminist issues. There are so many hilarious moments in this piece: a woman talking about how exhausting it is being a woman and being expected to maintain a vagina ‘like a hamster play-tunnel’ (!), while having her hair, nails and feet done by the rest of the cast; a movement sequence to Dolly Parton’s 9-5 in which the cast writhe away from imaginary groping hands on the tube; frank translation of male harassment apologists’ non-apologies. And more hard-hitting scenes, in which the humour has a bitter tang: a group of white feminists ignoring Kayle Meikle’s character when she is holding the Allen key to their flatpack furniture project; a WI meeting that wants to check its new member is a ‘real woman’ by an invasive bodily examination. Rafaella Marcus’s direction is inventive and the cast take on their many roles with conviction and energy.

However, I wanted some kind of interpretative framework or, dare I say it, narrative thread to bind it all together. Maybe that thread is feminism, given that the Womanifesto credits Mina Loy’s The Feminist Manifesto (1914), which begins ‘The feminist movement as at present instituted is Inadequate’. Is I Have a Mouth saying that feminism has itself become an institution or institutionalised? The cast all wear ‘We should all be feminists’ T-shirts and one character says she bought hers for £400. It takes swipes at (white) feminism’s exclusion of women of colour, the commercial appropriation of feminism, the younger generation’s tendency to erase the activism of their mothers. However, the sketch format does not necessarily lend itself to either nuance or context (which Zakarian hilariously personifies at one point). Instead, it can seem like a namechecking of issues: body-shaming, marriage, periods, sexual harassment, workplace sexism. In addressing some of the exclusions of twenty-first century feminism, I Have a Mouth made me more conscious of its own exclusions. In her review, Ava Davies points out ‘the decision to hold white feminism to account is important and overdue until we realise that it’s again centering white women in a piece that is made up of a majority of white women’. Also, where are the queer women? There are a couple of token lesbian characters but, given that reference is made to transphobia, it is troubling that being a woman seems to be equated with having periods in the celebration of Judy Chicago’s art? Where are the disabled women? I know that I Have a Mouth can’t say everything in 60 minutes and it is more intersectional than many professedly feminist shows, but omissions are still politically significant.

As a researcher and maker of feminist theatre, it feels like a betrayal of solidarity for me to critique a feminist piece of theatre. However, I am bringing my critical attention to bear upon I Have a Mouth because I believe it is an important piece of theatre with important things to say and a valuable project. Just like I Have a Mouth’s critique of feminism definitely does not want to do away with or discount feminism, but rather to show how important it still is. In Bodies that Matter, Judith Butler, paraphrasing Gayatri Spivak, says that deconstruction is ‘the critique of something useful, the critique of something we cannot do without’. Therefore, she argues, it is vital to critique the term ‘woman’, ‘without which feminism loses its democratizing potential through refusing to engage – take stock of, and become transformed by – the exclusions which put it into play’. (OK this definitely counts as bringing academia as a tool rather than a hammer). I Have a Mouth and I Will Scream feels like it is still in development. But when it finds its voice, I’ll be listening to hear its roar.

I Have a Mouth and I Will Scream was performed as part of Vault Festival 2018. Click here for more details.